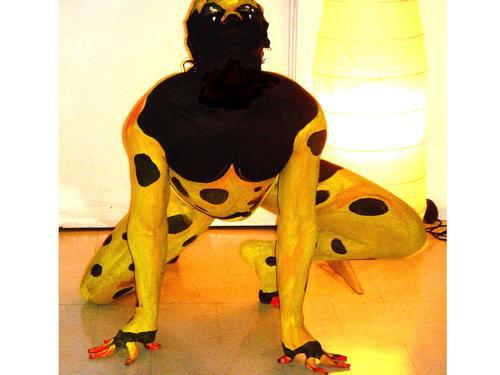 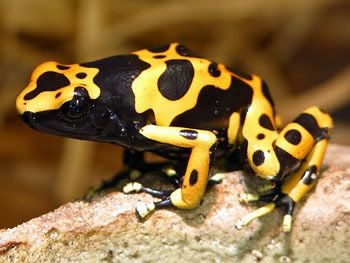 “No longer a human being, my breathing was different, faster. I felt vulnerable, a bi-color odd rare and dangerous frog, out of it’s habitat, a prey and in the same time a fierce resourceful hunter. I felt protected by my “Stanislavski” poisonous super powers. Naked but wearing colors, just like my brazilian indigenous roots. No longer thinking, just simply existing. To understand the similarity between the two animals – human and frog, I must let my body go… It went in this pure instinct and generous state, no gender, no judgment, no longer being a human.” – Leopold Nunan 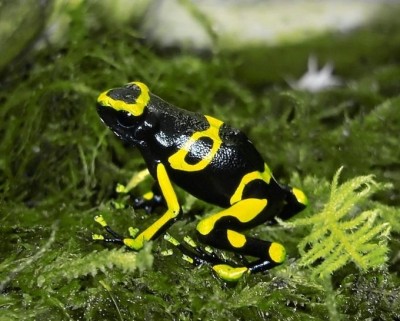 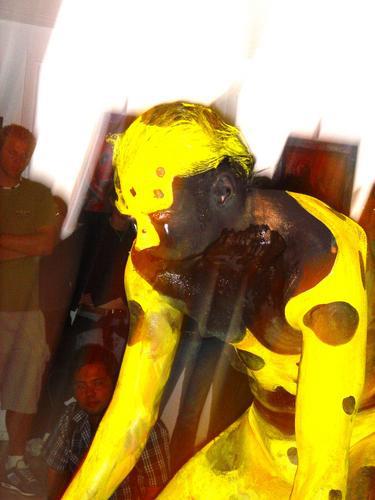 D. leucomelas is found in the northern part of continent of South America, most notably in Venezuela. It is also found in parts of Guyana, Brazil, and the extreme easternmost part of Colombia.[2] This amphibian is normally found in very humid conditions in tropical rain forests, close to fresh water. It is often found on flat rocks, trees, plants (notably bromeliads), and the leaf litter of the forest floor. During the dry season, specimens are known to congregate in damper places, such as under rocks or fallen tree trunks.[1]

The D. leucomelas’ natural habitat is tropical, and not subject to great seasonal temperature variations. Typically, temperature variances are related to elevation and time of day, and range from the low 20s to the low 30s °C. In captivity, care must be taken not to overheat the frogs, as they can be sensitive to higher temperatures.

Although preferring high humidity levels, this species can handle lower humidity levels much better than other species in the genus. Specimens can also be found in the seasonally drier forest islands in its natural range, and at elevations ranging from sea level to 800 metres AMSL.[3]